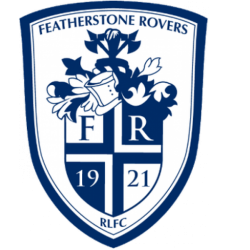 Featherstone Rovers are a professional rugby league club in Featherstone, West Yorkshire, England, who play in the Championship.
Featherstone is a small former coal mining town with a population of around 16,000 and Rovers are one of the last "small town teams" which were common in rugby league in the early 20th century. Known as Fev or Flat Cappers but their "official" nickname has always been "The Colliers" the club has produced many junior players who have gone on to play for Super League clubs. Their local rivals are Castleford and Wakefield Trinity, and in the Championship Halifax.
The club have won the Challenge Cup three times, in 1967, 1973 and 1983, and been League Champions once, in 1977. Post Office Road, (currently known as the L.D. Nutrition Stadium for sponsorship purposes), is a rugby league ground in Featherstone, near Pontefract, West Yorkshire, England. It is the home of rugby league club Featherstone Rovers. The ground's current capacity is 9,850.
The ground opened in 1904 and has been used by the club since their formation in 1908. The record attendance is 17,000 from a 1957 game against St. Helens.