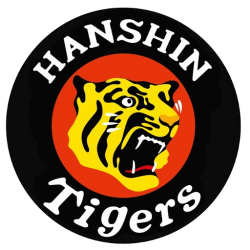 The Hanshin Tigers are a Nippon Professional Baseball team playing in the Central League. The team is based in Nishinomiya, Hyōgo Prefecture, Japan, and are owned by Hanshin Electric Railway Co., Ltd., a subsidiary of Hankyu Hanshin Holdings Inc.
The Hanshin Tigers are one of the oldest professional clubs in Japan. They played their first season in 1936 as the Osaka Tigers and assumed their current team name in 1961.
The Hanshin Tigers, one of the oldest professional clubs in Japan, were founded on December 10, 1935 with the team being formed in 1936. The team was first called "the Ōsaka Tigers". In 1940, amid anti-foreign sentiment, the Tigers changed the name to "Hanshin" and in 1947 changed the name back to "Ōsaka Tigers". The current team name was assumed in 1961. Hanshin Koshien Stadium commonly referred to as simply Koshien Stadium, is a baseball park located near Kobe in Nishinomiya, Hyōgo Prefecture, Japan. The stadium was built to host the national high school baseball tournaments, and opened on August 1, 1924. It was the largest stadium in Asia at the time it was completed, with a capacity of 55,000.