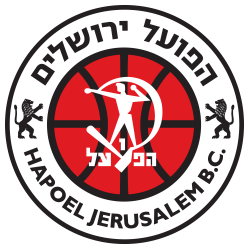 Hapoel Jerusalem Basketball Club (Hebrew: הפועל ירושלים‎), for sponsorships reasons Hapoel Bank Yahav Jerusalem, is a professional basketball club based out of the City of Jerusalem and competes in the Israeli Premier League, the Israeli State Cup and the Basketball Champions League. Hapoel has won several titles, including the ULEB Cup (now called EuroCup) in 2004, the Israeli League championship in 2015 and 2017 and five state Cups. In 2013, a new ownership group headed by Ori Allon took over, and the club has since seen a remarkable advancement and expansion. The team began playing in the Jerusalem Arena in 2014.

History
Hapoel Jerusalem Basketball Club was founded in 1935 and incorporated in 1943. It had its first appearance in the Premier League in 1955. Hapoel played in the first division most of the 1950s and 1960s, with notable players, such as David Kaminsky and Amir Berlinsky. The following two decades had ups and downs, as Hapoel toggled between the first and second divisions.

In 1986, led by coach Simi Riger, the team advanced to the Premier League, after five consecutive years in the second division. Since then, Hapoel has remained in the Premier League and become an important factor in the Israeli Basketball.

In 1996 and 1997, Hapoel won the State Cup, defeating Maccabi Tel Aviv in the finals, at the Yad Eliyahu (Nokia) Arena. The team was led by Adi Gordon, widely considered the team's symbol and one of its best players.

In 2004, Hapoel Jerusalem won its first European title, the ULEB Cup (EuroCup), defeating Real Madrid in the final in Charleroi, Belgium. Also in that year, the other major European basketball competition, the EuroLeague, was won by Maccabi Electra Tel Aviv, making Israel the leading basketball nation in Europe and the Middle East for 2004.

In September 2009, oil tycoon Guma Aguiar joined Hapoel Jerusalem as the team's sponsor and helped clear the debts left by Gaydamak. This ensured Hapoel would be able to compete again at the highest levels. On October 8, 2009, Hapoel beat Maccabi Tel Aviv in the Winner Cup finals 86–80, winning the club's second cup in a row.

In April 2014, the New York Post and The Wall Street Journal reported that six-time NBA All-Star Amar'e Stoudemire might join Hapoel after his contract with the New York Knicks officially expired at the end of the 2014–15 NBA season. Stoudemire signed with the Dallas Mavericks to finish out his original contract that had expired with the Knicks at that time, and then went to the Miami Heat after his deal with the Mavericks expired. Once he decided to retire from the NBA in July 2016, he signed with Hapoel Jerusalem on August 1, 2016.

On June 25, 2014, the Executive Board of Euroleague Commercial Assets unanimously agreed to give Hapoel a wild-card to compete for a spot in the EuroLeague qualifications. They recognized that Hapoel was building as a promising club, with a new ownership group with great stability and a brand new 11,000-seat arena to be ready for the 2014–15 season.

The Jerusalem Arena (Hebrew: הארנה ירושלים‎, HaArena Yerushalayim), renamed for the National Lottery Mifal HaPais grant as Pais Arena Jerusalem (Hebrew: פיס ארנה ירושלים‎, HaPais Arena Yerushalayim), is a multi-purpose sports arena that was built in Jerusalem by the city council and National Lottery grant of Mifal HaPais. Opened in September 2014, the arena is located in the Jerusalem Sports Quarter, in the southwestern Malha neighborhood, adjacent to Teddy Stadium. The arena seats 11,000 for basketball games.