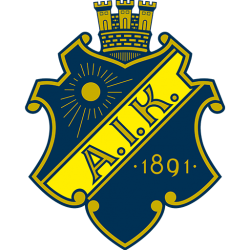 Allmänna Idrottsklubben Ishockeyförening (abbreviated AIK Hockey, or simply AIK), is the ice hockey department of sports club Allmänna Idrottsklubben based in Stockholm, Sweden. Since 2014 AIK's men's team compete in HockeyAllsvenskan, the second tier of ice hockey in Sweden, following a four-year spell in the top flight, the SHL. The women's team competes in Riksserien, the highest division of women's ice hockey. AIK's home games are mainly played at Hovet, which seats 8,050 spectators, though some high-profile games may be played at the Ericsson Globe which has a larger capacity of 13,850.

Hovet (formerly known as Johanneshovs Isstadion) is an arena located in the Johanneshov district of Stockholm (Stockholm Globe City) which is mainly used for ice hockey, concerts and corporate events. It was opened in 1955 as an outdoor arena, however a roof was added in 1962, and the arena interior has also been a subject to major renovation in 2002. The arena's main tenants are ice hockey clubs AIK and Djurgårdens IF. The official capacity is 8,094 spectators for ice hockey events and 8,300 during concerts.