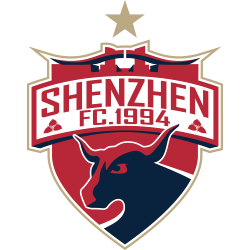 Shenzhen Football Club (simplified Chinese: 深圳市足球俱乐部; traditional Chinese: 深圳市足球俱樂部; pinyin: Shēnzhènshì Zúqiú Jùlèbù) is a professional Chinese football club that participates in the Chinese Super League division under licence from the Chinese Football Association (CFA). The team is based in Shenzhen, Guangdong and their home stadium is the Shenzhen Universiade Sports Centre that has a seating capacity of 60,334. Their majority shareholder is Property Development company the Kaisa Group who took over the club on April 12, 2016.

The club was founded on January 26, 1994 and was known as Shenzhen FC while they started at the bottom of the Chinese football pyramid in the third tier. After successive league title wins in the third and second tier of the professional football leagues, they were promoted to the top tier in the 1996 Chinese Jia-A League season. After only one season they were relegated, however they quickly regained promotion and started to establish themselves within the league before they won the rebranded 2004 Chinese Super League title, making them the first club to win all three divisions within the Chinese league pyramid. Since this achievement the club have struggled to match the same success and after 14 years experienced relegation to the second tier at the end of 2011 Chinese Super League season.

History
Early club era
Shenzhen Football Club was founded on 26 January 1994 by former Chinese players that included Rong Zhixing and Zeng Xuelin after the Chinese Football Association had allowed full professionalism and private ownership throughout their football league system. In an attempt for the City of Shenzhen to gain their first professional football team the club decided that the best way to gain funding was through memberships that included 100 corporate members and 300 individuals before changing the ownership into shareholdings. With Hu Zhigang as their first ever head coach and with players from all over the country, the club won two consecutive promotions and championships before entering the top tier of Chinese football after only two seasons, a remarkable feat named "Shenzhen speed" by the locals.

The club's first foray in the top tier, however was not a success and they were immediately relegated at the end of the 1996 campaign. In January 1997, Ping An Insurance took over the club and renamed it to "Shenzhen Ping'an". With this new ownership the club immediately won back promotion to the top tier after coming runners-up within their division. Once again the team struggled with relegation, however South Korean football legend Cha Bum-Kun was appointed as the club's first ever foreign head coach in the summer of 1998. Cha consolidated the club's status within the top tier with two successful relegation escapes. Meanwhile, the club made a long-term combined signing of 14 hot prospects from Tianjin Locomotive's 1st team as fresh blood, among them included future prospects Li Weifeng and Li Yi.

At the start of the 2000 season on March 27, newly appointed head coach the eccentric Brazilian Edson Tavares caught six players Peng Weiguo, Chen Yongqiang, Zhang Jun, Sun Gang, Wang Chao and Yao Li with prostitutes in the team hotel. This internal incident was leaked to the media becoming an open scandal, however the club claimed inconsistencies with the story, nevertheless the players involved had to make a public apology while the club relieved Tavares of his post as a scapegoat. General manager Zhu Guanghu took over in May and started his regime during, which Shenzhen became a major force within the league and placed fifth in 2001 before coming runners-up in 2002 (though through a joking poker sortition at a formal FA judgment process, in which coach Xie Feng picked card 6 and stated it as 9 and thus won a runner-up back for Shenzhen) their highest finish at the time. On 15 September 2018, the NHL played one pre-season game at the stadium between the Calgary Flames and Boston Bruins.