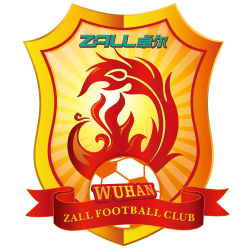 Tianjin Teda vs Wuhan Zall (17 May)

Wuhan Zall Football Club (simplified Chinese: 武汉卓尔; traditional Chinese: 武漢卓爾; pinyin: Wǔhàn Zhuó'ěr) is a professional Chinese football club that currently participates in the Chinese Super League under licence from the Chinese Football Association (CFA). The team is based in Wuhan, Hubei and their home stadium is the Dongxihu Sports Centre that has a seating capacity of 60,000. Their current majority shareholder is the investment company Wuhan Zall Development Holding Co. Ltd.

The club was founded in 2009 after the withdrawal and then dissolution of its predecessor Wuhan Guanggu from the league after the club had a dispute with the Chinese Football Association over their on-field behaviour. The Hubei Province soccer association decided to help form a new team with players mainly from the former Wuhan Guanggu and Hubei youth teams. They entered at the start of the 2009 league campaign at the bottom of the professional Chinese football league pyramid in the third tier. The team won promotion to the 2013 Chinese Super League after coming runners-up in the 2012 China League One division and spent only one season in the top flight before being relegated back down. In 2018, the team won the League One again and earned their second season in the top flight. Dongxihu Sports Centre (Chinese: 东西湖体育中心) is a sports complex located in Dongxihu District, Wuhan, Hubei, China. The complex consists of a 30,000-seat multi-purpose stadium, an 8,000-seat gymnasium and a 3,000-seat natatorium. It broke ground on 1 April 2017, and expected to open in March 2019. On 26 December 2018, Shenzhen Kaisa Culture & Sports Group won the operative right of the Sports Centre for nine years.