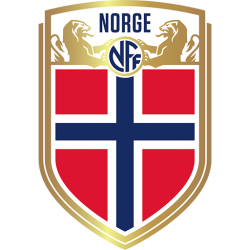 The Norway national football team (Norwegian: Norges herrelandslag i fotball, or informally Landslaget) represents Norway in men's international football and is controlled by the Norwegian Football Federation, the governing body for football in Norway. Norway's home ground is Ullevaal Stadion in Oslo and their head coach is Lars Lagerbäck. In February 2019, they were ranked by FIFA at No. 48., Norway has participated three times in the FIFA World Cup (1938, 1994, 1998), and once in the UEFA European Championship (2000).

Norway is, along with Senegal, the only national team that remains unbeaten in all matches against Brazil. In four matches, Norway has a play record against Brazil of 2 wins and 2 draws, in three friendlies matches (in 1988, 1997 and 2006) and a 1998 World Cup group stage match.

The stadium opened on 26 September 1926 as the home ground for Lyn and several other local teams. The first international match was played in 1927, and NFF started gradually purchasing part of the stadium company. The peak attendance dates from 1935, when 35,495 people saw Norway play Sweden. Since 1948, Ullevaal has hosted the finals of the Norwegian Football Cup, and in 1967 the Japp Stand was completed. A new renovation started with the completion of the single-tier West Stand in 1985, and continued with the two-tier North and East Stands in 1990 and the South Stand in 1998. Ullevaal hosted the finals of the UEFA Women's Euro in 1987 and 1997.

In conjunction with the stadium is the head office of many sports federations, a bandy field, and commercial property including a conference center, hotel and shopping mall. The stadium is located adjacent to Ullevål Stadion Station of the Oslo Metro and the Ring 3 motorway. Plans call to replace the West Stand to increase capacity to 30,000 and perhaps add a retractable roof and artificial turf.