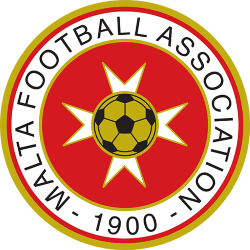 The first official game played by Malta was a 2–3 defeat in a friendly against Austria in 1957. Their competitive debut arrived five years later, playing against Denmark in the preliminary round of the 1964 European Nations' Cup. Since becoming a UEFA member in 1960 and a FIFA member in 1959, Malta have competed in every qualifier for the European Championship and World Cup, without ever making it to the finals of any major international competition.

The National Stadium (Maltese: il-Grawnd Nazzjonali ta' Ta' Qali), locally also referred to as Ta' Qali, is a stadium located in Ta' Qali, Malta. The stadium, which also contains the headquarters of the Malta Football Association, seats 16,997 people and is, by far, the largest stadium in the country. It serves as the national football stadium of Malta and is the home stadium of the Malta national football team. The stadium, together with three other stadiums, also hosts the Maltese Premier League and some of the matches of the Maltese FA Trophy, including the final.