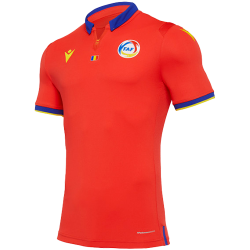 The Andorra national football team (Catalan: Selecció de futbol d'Andorra) represents Andorra in association football and is controlled by the Andorran Football Federation, the governing body for football in Andorra. The team has enjoyed very little success due to the Principality's tiny population, the fifth smallest of any UEFA country (only Liechtenstein, San Marino, Gibraltar and the Faroe Islands are smaller).

The Estadi Nacional is a stadium located in Andorra la Vella. It is the national stadium of Andorra, and is used for association football and rugby union.

It has a capacity of 3,306, and the pitch is made of artificial turf.