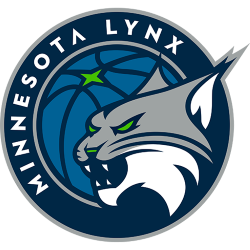 The Minnesota Lynx are an American professional basketball team based in Minneapolis, Minnesota, playing in the Western Conference in the Women's National Basketball Association (WNBA). The team won the WNBA title in 2011, 2013, 2015, and 2017.

Founded prior to the 1999 season, the team is owned by Glen Taylor, who is also the majority owner of the Lynx' NBA counterpart, the Minnesota Timberwolves. The franchise has been home to many high-quality players such as Katie Smith, explosive small forward Seimone Augustus, native Minnesotan Lindsay Whalen, UConn standout Maya Moore, forward Rebekkah Brunson, and center Sylvia Fowles.

The Lynx have qualified for the WNBA playoffs in eleven of their twenty-one years. With four championships, the Lynx are tied with the Houston Comets for the most titles in WNBA history, and they have won more Western Conference championships than any other franchise. They currently hold a WNBA record 9 consecutive playoff appearances.