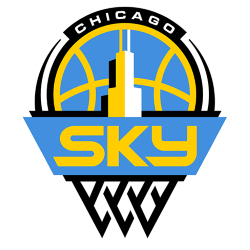 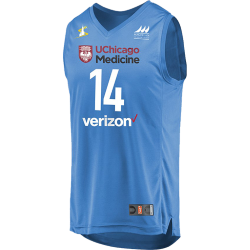 The Chicago Sky are an American professional basketball team based in Chicago, playing in the Eastern Conference of the Women's National Basketball Association (WNBA). The franchise was founded before the 2006 WNBA season began. It is owned by Michael J. Alter (principal owner) and Margaret Stender (minority owner). The team experienced a period of success from 2013 to 2016, making four playoff appearances and playing in the 2014 WNBA Finals.

Like some other WNBA teams, the Sky is not affiliated with a National Basketball Association (NBA) counterpart, although the Chicago Bulls play in the same market. Wintrust Arena at McCormick Square, previously referred to as DePaul Arena or McCormick Place Events Center, is a 10,387 seat sports venue in Chicago's Near South Side community area that opened in 2017. It is the current home court for the men's and women's basketball teams of DePaul University and serves as an events center for McCormick Place. It also is the home of the Chicago Sky of the Women's National Basketball Association (WNBA).

The arena was announced in May 2013, with construction planned to begin in 2014, and use expected to begin with the 2016–17 season. The start of construction was delayed to November 2015, with completion delayed until the 2017–18 season. Although DePaul had been seeking a new home arena — it used Allstate Arena in suburban Rosemont starting 1980 — it rejected a November 2012 ten-year offer to play rent free at the United Center. Instead, DePaul planned to use Allstate Arena on a recurring one-year basis until it had a new home. On November 16, 2016, DePaul and the Metropolitan Pier and Exposition Authority (MPEA or "McPier") announced that the new event center at McCormick Square would be called Wintrust Arena. The announcement came after the signing of a letter of intent that contemplated a definitive 15-year sponsorship agreement between DePaul and Wintrust.