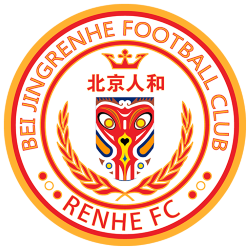 Beijing Renhe Football Club (Chinese: 北京人和; pinyin: Běijīng Rénhé) is a professional Chinese football club that currently participates in the Chinese League One under licence from the Chinese Football Association (CFA). The team is based in Fengtai, Beijing and their home stadium is the Beijing Fengtai Stadium that has a seating capacity of 31,043. Their current majority shareholder is Chinese property developers of shopping centers Renhe Commercial Holdings Company Limited.

The club was founded in Pudong, Shanghai on 3 February 1995 and were originally known as Shanghai Pudong before they made their debut in the third tier of China's football league pyramid in the 1995 league season. They would work their way up to the top tier while changing name to accommodate their sponsors. In the 2006 league season the club would relocate the team to Shaanxi and rename themselves Xi'an Chanba International, however by the 2012 league season, the club relocated this time to Guizhou, and changed their name to Guizhou Renhe. In the 2016 league season the club relocated the team to Fengtai, Beijing, and changed their name to Beijing Renhe. Throughout the club's history their greatest achievement has been winning the 2013 Chinese FA Cup while the highest position they have ever finished was second within the 2003 league season. The Beijing Fengtai Stadium (Chinese: 丰台体育场) is a multi-purpose stadium in Beijing, China. It is currently used mostly for football matches and also sometimes for athletics. The stadium is the home ground of Beijing Renhe. The stadium holds 31,043. The Fengtai Stadium was not used for football during the Beijing Olympics of 2008. The venue also hosted home games of Beijing Guoan, the third Chinese sports club with 5 million followers on Weibo after Guangzhou Evergrande and Shandong Luneng Taishan. One of those games was against the world famous Spanish side FC Barcelona in August 2007.