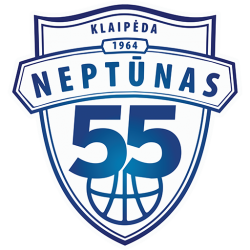 BC Žalgiris vs BC Neptūnas (28 Feb)

BC Neptūnas (Lithuanian: Krepšinio klubas Neptūnas), commonly known as Neptūnas or Neptūnas Klaipėda, is a basketball club from Klaipėda, Lithuania participating in the Lithuanian Basketball League and internationally in the Champions League. It was founded in 1962 under the name BC Maistas (English: Food) and in 1964, BC Maistas's name was changed to BC Neptūnas. The club carries the name of the Roman sea god Neptune. Neptūnas participated in the 2014–15 EuroLeague season and is only the third Lithuanian club to participate in the premier European basketball league, after Žalgiris and Lietuvos rytas.

Švyturio Arena (English: Lighthouse Arena) is an indoor arena in Klaipėda, Lithuania. The arena is named after the company Švyturys, which bought the rights for the name. The capacity of the catamaran-shaped arena is 6,200 seats for basketball games, 4,416 for ice hockey games, 6,512 for boxing/wrestling matches, and 7,450 seats for concerts.