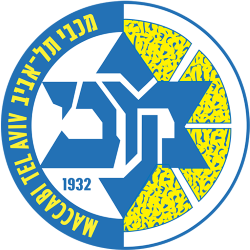 The club started in the mid-1930s, as part of the Maccabi Tel Aviv Sports Club, which had been founded in 1906.

With 6 EuroLeague championships (including the 2001 FIBA SuproLeague), one Adriatic League championship, 52 Israeli League championships, 44 Israeli State Cup titles, and 7 Israeli League Cup titles, Maccabi has been the most successful basketball team in Israel, and is also one of the most successful basketball teams in Europe. Its players, such as: Tal Brody, Miki Berkovich, Jim Boatwright, Kevin Magee, Earl Williams, and Aulcie Perry; and more recently, Derrick Sharp, Šarūnas Jasikevičius, Tal Burstein, Anthony Parker, and Nikola Vujčić, have been among the elite of Europe's basketball players.

Menora Mivtachim Arena (Hebrew: היכל מנורה מבטחים‎) is a large multi-purpose sports indoor arena that is located in southern Tel Aviv, Israel. The arena is primarily used to host tennis matches, basketball games, and concerts. It is one of the major sporting facilities in the Greater Tel Aviv Area. The arena is owned by the municipality of Tel Aviv, and is managed by Sports Palaces Ltd., a company also fully owned by the municipality (which also manages Bloomfield Stadium). On January 1, 2015, the arena changed its name to Menora Mivtachim Arena.

The arena is home to the Maccabi Tel Aviv basketball club, a member of the Maccabi Tel Aviv sports club. It has hosted the Israeli Super League final four, the Israeli State Cup final four, and most of the senior Israeli national basketball team's home games. It also hosted the 1994 FIBA European League Final Four and the 2004 Euroleague Final Four. In other sports, it has also hosted a 1989 Davis Cup World Group match, between Israel and France, and the 2009 Davis Cup quarterfinals between Israel and Russia, in July 2009.