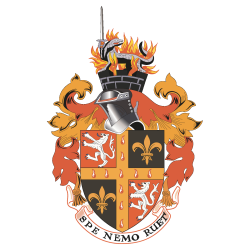 Spennymoor Town Football Club is a football club based in Spennymoor, County Durham, England. They currently compete in the National League North, the sixth tier of English football, and play their home matches at the Brewery Field.

The club began playing in the Northern League in 1931–32 as Evenwood Town, reaching the first round of the FA Cup in the 1956–57 season. In 2005, the club merged with Spennymoor United, who had folded earlier that year, and collectively changed their name to Spennymoor Town.

Throughout Spennymoor United's history, their home venue was the Brewery Field. They started using the Brewery Field when the club was formed in 1904 and took over use of it from Tudhoe Rugby Club. The ground itself used to belong to 'Tower Brewery', which was located on King Street, hence the name 'Brewery Field'. The ground is located near the bottom of Spennymoor, on Wood Vue off Durham Road.

After the merger with Evenwood Town, Spennymoor Town were granted the lease from the town council and decided to carry on using The Brewery Field for their home games. Most notably to the fans, the sign over the Wood Vue entrance had the 'United A.F.C.' removed and left with just 'Spennymoor'. In late 2012 and early 2013, a lot of upgrades were made to the ground, including brand new floodlights, manufactured by local company Thorn Lighting to replace the old ones, which had been at the ground for over 40 years. Other improvements were made, such as a tunnel for the players leading into the home and away dressing rooms and new dugouts on the far side of the pitch, as well as new terracing and access for disabled fans. New work is planned to rebuild the old clubhouse that was burnt down on Christmas Day 2003.

Spennymoor Town's biggest attendance at Brewery Field came in February 2013 when 2,670 fans turned out for a Northern Football League Division One game against Championship rivals Darlington.