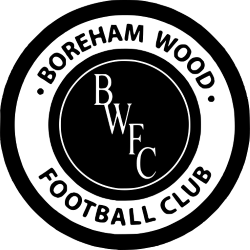 Boreham Wood Football Club is a football club based in Borehamwood, Hertfordshire, England. They are currently members of the National League, the fifth tier of English football, and play at Meadow Park.
Established in 1948, they are known as "the Wood" and have a local rivalry with St Albans City. The club was established in 1948 as a merger of Boreham Rovers and Royal Retournez, and began playing in the Mid-Herts League. In 1951 they joined the Parthenon League, and finished as runners-up in 1953–54 and 1954–55 before winning the title in 1955–56. After finishing as runners-up again in 1956–57, they joined the Spartan League. They finished as runners-up in 1963–64 and again in 1965–66, after which they switched to Division Two of the Athenian League.

Meadow Park is a football ground in Borehamwood, Hertfordshire, England. It is the home ground of Boreham Wood F.C. and also hosts the home matches of Arsenal Women F.C., Arsenal youth teams, and Watford Reserves.