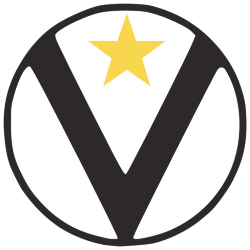 Virtus Pallacanestro Bologna, known for sponsorship reasons as Segafredo Virtus Bologna, is an Italian professional basketball club based in Bologna, Emilia-Romagna. The Club was founded in 1929, which makes it the oldest club in the Lega Basket Serie A, and it is the second most titled basketball club in Italy after Olimpia Milano, having won 15 Italian League championships, 8 Italian National Cups and 1 Italian Supercup. It currently plays in the Italian first division LBA.

Unipol Arena (previously known as Futureshow Station and PalaMalaguti) is an indoor sporting arena located in Casalecchio di Reno, Province of Bologna, Italy. The seating capacity of the arena is for 11,000 people and it was opened in December 1993. It is currently home to the Virtus Bologna basketball team.

During the year 2008, the arena had restyling works, which included a museum dedicated to Virtus' history, four new JumboTrons, new white seats and black stairs and new white parquet. The capacity of the arena rose from the original 8,300 up to 11,000. Other museums will also be built, one dedicated to Futurshow, and one dedicated to Luciano Pavarotti. The Arena will be tied to a station. On October 2011 the arena changed name to current Unipol Arena in a deal to last until 2016.