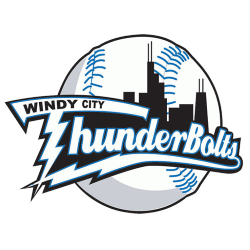 The Windy City ThunderBolts are a professional baseball team based in the Chicago suburb of Crestwood, Illinois, in the United States. The ThunderBolts are a member of the Frontier League, which is not affiliated with Major League Baseball. From the 1999 season to the present, the ThunderBolts have played their home games at Standard Bank Stadium.

Standard Bank Stadium is a baseball field located in Crestwood, Illinois. The stadium was built in 1999 and holds 3,200 people. It is the home field of the 2007 and 2008 Frontier League Champion Windy City ThunderBolts. The park features one of the few minor league baseball stadium upper decks in the country. The park was built for the Cook County Cheetahs however new ownership changed the name of the team into the current Windy City ThunderBolts. The name change brought renovations to the ballpark between 2004 and 2006 including a new fan deck on the first base side, a beer garden, a new kids zone down the left field line, and a new ticket office also down the left field line. The ballpark was originally called Hawkinson Ford Field until the 2007 season when the park's name was modified to Hawk Ford Field. The most recent name change, which will remain for the foreseeable future, occurred during the 2007 season on August 13, when the naming rights were sold to Standard Bank.