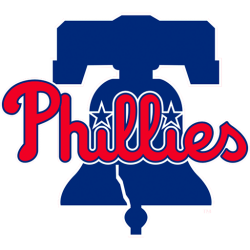 The Philadelphia Phillies are an American professional baseball franchise based in Philadelphia, Pennsylvania. They are the oldest continuous, one-name, one-city franchise in all of professional American sports, dating back to 1883. The Phillies compete in Major League Baseball (MLB) as a member club of the National League (NL) East division. Since 2004, the team's home has been Citizens Bank Park, located in South Philadelphia. Citizens Bank Park is a baseball park located in Philadelphia, within the South Philadelphia Sports Complex. It is the home of the Philadelphia Phillies, the city's Major League Baseball (MLB) franchise. It is commonly referred to by locals simply as "The Bank" or "CBP". Citizens Bank Park opened on April 3, 2004, and hosted its first regular season baseball game on April 12 of the same year, with the Phillies losing to the Cincinnati Reds, 4–1.