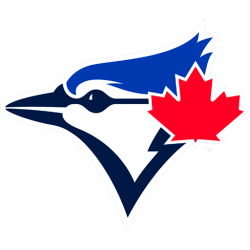 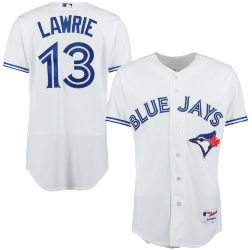 The Toronto Blue Jays are a Canadian professional baseball team based in Toronto, Ontario. The Blue Jays are a member of the East division of the American League (AL) in Major League Baseball (MLB), and play their home games at Rogers Centre.

The "Blue Jays" name originates from the bird of the same name, and blue is also the traditional colour of two of Toronto's other professional sports teams: the Maple Leafs (ice hockey) and the Argonauts (Canadian football). In addition, the team was originally owned by the Labatt Brewing Company, makers of the popular beer Labatt's Blue. Colloquially nicknamed the "Jays", the team's official colours are royal blue, navy blue, red, and white. An expansion franchise, the club was founded in Toronto in 1977. Originally based at Exhibition Stadium, the team began playing its home games at the SkyDome, upon its opening in 1989. Since 2000, the Blue Jays have been owned by Rogers Communications and in 2004, the SkyDome was purchased by that company, which it renamed Rogers Centre. They are the second MLB franchise to be based outside the United States, and currently the only team based outside the U.S. after the first Canadian franchise, the Montreal Expos, relocated to Washington, D.C. after the 2004 season and became the Washington Nationals.

In the late 1970s and early 1980s, the Blue Jays went through struggles typical of an expansion team, frequently finishing in last place in its division. In 1983, the team had its first winning season and two years later, they became division champions. From 1985–1993, they were an AL East powerhouse, winning five division championships in nine seasons, including three consecutive from 1991–93. During that run, the team also became back-to-back World Series champions in 1992 and 1993, led by a core group of award-winning All-Star players, including Hall of Famer Roberto Alomar, Joe Carter, John Olerud, and Devon White. The Blue Jays became the first (and, to date, only) team outside the U.S. to appear in and win a World Series, and the fastest AL expansion team to do so, winning in its 16th year. After 1993, the Blue Jays failed to qualify for the playoffs for 21 consecutive seasons, until clinching a playoff berth and division championship in 2015.

The Blue Jays are one of three MLB teams under corporate ownership, with the other two being the Seattle Mariners (Nintendo of America) and the Atlanta Braves (Liberty Media).

The Blue Jays played their first game on April 7, 1977 against the Chicago White Sox before a home crowd of 44,649. The game is now perhaps best remembered for the minor snowstorm which began just before the game started. Toronto won the snowy affair 9–5, led by Doug Ault's two home runs. That win would be one of only 54 of the 1977 season, as the Blue Jays finished last in the AL East, with a record of 54–107. After the season, assistant general manager Pat Gillick succeeded Peter Bavasi as general manager of the team, a position he would hold until 1994.

In 1978, the team improved their record by five games, but remained last, with a record of 59–102. In 1979, after a 53–109 last place finish, shortstop Alfredo Griffin was named American League co-Rookie of the Year. In addition, the Blue Jays' first mascot, BJ Birdy, made its debut in 1979.

In 1980, Bobby Mattick became manager, succeeding Roy Hartsfield, the Blue Jays' original manager. In Mattick's first season as manager, although they remained at the bottom, Toronto almost reached the 70-win mark, finishing with a record of 67–95, a 14-win improvement on 1979. Jim Clancy led with 13 wins and John Mayberry became the first Jay to hit 30 home runs in a season.

In the strike-divided season of 1981, the Blue Jays finished in last place in the AL East in both halves of the season. They were a dismal 16–42 in the first half, but improved dramatically, finishing the 48-game second half at 21–27, for a combined record of 37–69. Rogers Centre (originally named SkyDome) is a multi-purpose stadium in downtown Toronto, Ontario, Canada situated just southwest of the CN Tower near the northern shore of Lake Ontario. Opened in 1989 on the former Railway Lands, it is home to the Toronto Blue Jays of Major League Baseball (MLB). Previously, the stadium served as home to the Toronto Argonauts of the Canadian Football League (CFL), Toronto Raptors of the National Basketball Association (NBA), and the Buffalo Bills of the National Football League (NFL), which played an annual game at the stadium as part of the Bills Toronto Series. While it is primarily a sports venue, it also hosts other large-scale events such as conventions, trade fairs, concerts, travelling carnivals, and monster truck shows.

The stadium was renamed "Rogers Centre" following the purchase of the stadium by Rogers Communications, which also bought the Toronto Blue Jays, in 2005. The venue was noted for being the first stadium to have a fully retractable motorized roof, as well as for the 348-room hotel attached to it, with 70 rooms overlooking the field. It is also the last North American major-league stadium built to accommodate both football and baseball. The stadium served as the site of both the opening and closing ceremonies of the 2015 Pan American Games. During the ceremonies, the site was referred to as the "Pan Am Dome" (officially as the "Pan Am Ceremonies Venue") instead of its normal name.