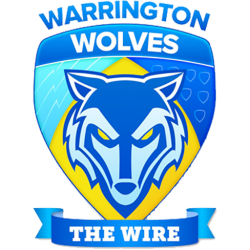 Warrington Wolves RLFC is a professional rugby league football club based in Warrington, England that competes in Super League. They play at the Halliwell Jones Stadium, having moved there from Wilderspool in 2003.

Warrington is one of the original twenty-two clubs that formed the Northern Rugby Football Union in 1895 and the only one that has played every season in the top flight. They are nicknamed "The Wire" in reference to the wire-pulling industry in the town.

The current head coach at the club is Tony Smith who joined in March 2009. As of the 2015 season, the captaincy is held by Second-rower Ben Westwood.

The official foundation date for the club is given as 1879, rugby football was certainly played in the town before that date and there was an earlier club bearing the same name. Under the heading 'Outdoor Sports – Football' the Widnes Guardian of 25 January 1873 reports on a recent game between Warrington and Wigan at the unnamed ground of the former. On 6 December 1873 that same newspaper carried details of a local derby between Warrington and Zingari and in subsequent weeks there were matches with Sale and Free Wanderers. Because surviving records from that era are fragmentary it is not possible to say with certainty what became of this Warrington club.

Warrington Zingari was founded in 1879 by Timothy Grix of Chatburn. The committee of the newly formed club managed to get the use of a field fronting Sankey Street. The headquarters of the club were at the White Hart Hotel in Sankey Street. The first match was an away game against the Walton side played at Rice Field in Liverpool on 18 October 1879. Walton won by three goals (converted tries) to nil.

After one season at Wilderspool Road, the club obtained another field at Slutchers Lane. A year later, Warrington moved back to Sankey Street to play in a field behind the town's post office. In 1883–84, they moved for the fourth time, this time back to Wilderspool Road, the new pitch being just a short distance from the previous ground.

In 1884–85, Warrington were strengthened again when the club Warrington Wanderers joined the town side. In 1886, the club won its first silverware, the South West Lancashire and Border Towns Trophy. On 28 August 1895, the Committee decided to join with 21 other clubs throughout Lancashire and Yorkshire to form a new 'Northern Union' and resigned from the RFU.

In 1900–01, Warrington reached the final of the Challenge Cup, facing Batley. A crowd of 29,000 turned out at Leeds to see Warrington battle hard but be beaten by two tries to nil. Warrington also appeared in the renamed South West Lancashire Cup against Leigh two days later. The strenuous game against Batley took its toll on the Warrington players and the match ended in a 0–0 draw, the replay never took place.

In 1903–04, Warrington defeated Bradford Northern in a semi-final replay to earn a place in the final of the Challenge Cup. Warrington put up a fine performance against Halifax but lost 8–3. In 1904–05, Warrington beat Hull Kingston Rovers 6–0 to win the Challenge Cup final in front of a crowd of 19,638.

In 1908, 14 November the first touring Australian rugby league team visit Warrington. The Kangaroos embarked upon a massive six months tour of Britain taking in 45 matches. Their timing was not good as the north of England was hit by strikes in the cotton mills, which badly affected attendances as fans could not afford to watch the pioneering Aussies. On Saturday 14 November 1908 Warrington played the Kangaroos. Warrington won the match 10 ' 3 with Jackie Fish the hero scoring one try and Ike Taylor the other, Fish and George Dickenson kicked a goal each. A crowd of 5,000 watched the match at Wilderspool. The Warrington team that day was Jimmy Tilley, Jackie Fish, George Dickenson, Ike Taylor, L. Treharne, Ernie Brookes, John Jenkins, Billy Dowell, Alf Boardman, Billy O'Neill, George Thomas, Peter Boardman and John Willie Chester. The Australians came back to Wilderspool for "revenge" later in the tour but tries from Fish and Jenkins earned the 'Wirepullers' an 8 ' 8 draw. Two members of the Kangaroo squad, Dan Frawley and Larry O'Malley later signed for Warrington and played the next season at Wilderspool. Warrington have the best record of any club side against the touring Kangaroos with eight wins and one draw from sixteen matches.

In 1913, 5th challenge cup final, Warrington reached their fifth Challenge Cup Final, with wins over Keighley, Hull KR, Salford and Dewsbury. The Final was lost 9–5 to the mighty Huddersfield team of "All-Stars". Warrington scored first through a try by Bradshaw converted by Jolley and gave a wonderful display in what was considered to be the best Cup Final of the pre-war era. A disappointing league season had seen Warrington finish 18th, their lowest pre Great War. So the Challenge Cup performances were a tremendous achievement.

Warrington closed for the 1915-16 season but recommenced playing in 1916 following the introduction of conscription which meant that would not be accused of keeping men from volunteering for the First World War. Halliwell Jones Stadium is a rugby league stadium in Warrington, England that is the home ground of Warrington Wolves. It has also staged Challenge Cup semi-finals, the European Nations Final, the National League Grand Finals' Day and two games of the 2013 Rugby League World Cup.
By the late 1990s, Warrington RLFC's spiritual home Wilderspool Stadium had become decrepit and unfit for purpose, and so the club looked to move to a new stadium. Before settling on the site which had formerly housed the Tetley Walker brewery, a site in Burtonwood was considered but these plans were rejected. The last competitive game at Wilderspool (after 105 years at the ground) was played on 21 September 2003, when Warrington beat Wakefield Trinity 52-12.
The stadium was notable for bucking the common trend of modern stadia by including terracing areas rather than being an all-seater stadium. There were originally 4 stands in the stadium – the North Stand (reserved seating), the East Stand (originally unreserved seating but later became reserved seating), the South Stand (home terracing), and the West Stand (visitors' terracing and overflow of home terracing). It also has enormous pitch dimensions of 120 m x 74 m, as requested by Warrington's head coach of the time, Paul Cullen, due to his desire to play expansive rugby.

The official capacity of the stadium is 15,200.

The stadium has already enjoyed several memorable moments, perhaps most notably Andrew Johns' debut for Warrington against Leeds in a 33-16 victory on 10 September 2005.

During the Co-operative Championship grand final rugby league game between Featherstone Rovers and Halifax on 26 September 2010, a fire beneath the terraced West Stand broke out, forcing all of the fans housed in the stand to be evacuated onto the field, holding up the game for around 45 minutes. Following a safety inspection the spectators were eventually allowed back in. However, when the smell of smoke failed to disperse, there was a further hold up as the fans were moved to the East Stand. The game resumed with no further interruptions. The fire is being treated as arson.