The Nashville Predators are a professional ice hockey team based in Nashville, Tennessee. They are members of the Central Division of the Western Conference of the National Hockey League (NHL).
In late 1995, rumors began to circulate that the New Jersey Devils would be relocating to the planned Nashville Arena. Nashville offered a $20 million relocation bonus to any team that would relocate and the Devils attempted to terminate their lease with New Jersey before finally restructuring it to stay put.
After the attempt to get the Devils, NHL Commissioner Gary Bettman noted that Nashville would probably at least be considered in upcoming expansion. The arena was opened in 1996, and after an attempt to bring the National Basketball Association (NBA)'s Sacramento Kings did not go through, the city instead went after a hockey team.
In January 1997, a group led by Wisconsin businessman Craig Leipold made a formal presentation before the NHL requesting an expansion franchise. When Bettman and league officials visited Nashville to tour the arena, thousands gathered on the Arena plaza to greet them. In June, the league granted conditional franchises to Nashville, Columbus, Ohio, Atlanta, and Minneapolis – Saint Paul. The Nashville team would be scheduled to begin play in 1998 if they met the NHL requirement of selling 12,000 season tickets before March 31, 1998. Of the four cities, Nashville was the only one with a completed arena, and therefore began play first. A month later, Leipold named former Washington Capitals general manager David Poile as the franchise's first general manager. Portland Pirates' head coach Barry Trotz was named the franchise's first head coach on August 6. Mitch Korn was named the first goaltending coach for the franchise.
On September 25, 1997, Leipold and team president Jack Diller held a press conference where they unveiled the franchise's new logo, a saber-toothed cat (Smilodon floridanus). The logo was a reference to a partial Smilodon skeleton found beneath downtown Nashville in 1971 during construction of the First American National Bank building, now the UBS Tower.
Once the logo was unveiled, the franchise held a vote among fans to choose a name. Three candidates were culled from 75: "Ice Tigers," "Fury" and "Attack." Leipold added his own submission to the vote, "Predators." On November 13, Leipold revealed at a press conference that his submission had won out and that the new franchise would be known as the "Nashville Predators."
At one point, rumors began to circulate that the team would move before the first puck ever hit the ice. One rumor had Leipold trading franchises with the Edmonton Oilers, with the Oilers moving to Nashville and the Nashville expansion franchise moving to Houston, Texas. Leipold shot this rumor down, saying "here is no chance."
When awarded a franchise, the city of Nashville paid 31.50% of the $80 million fee to join the League. The city has engaged an affiliate of the team to operate the arena and that agreement protects the city against annual arena operating losses over approximately $3.8 million. The $15 million payroll of the team was the lowest of the NHL.
The Predators first took the ice on October 10, 1998, where they lost 1–0 at home to the Florida Panthers. It was the only sold out game of the Predators' first five bouts in Nashville. Three nights later, on October 13, they defeated the Carolina Hurricanes 3–2 for their first win. Forward Andrew Brunette scored the first goal. Bridgestone Arena (originally Nashville Arena and formerly Gaylord Entertainment Center and Sommet Center) is an all-purpose venue in downtown Nashville, Tennessee, that was completed in 1996.
The Bridgestone Arena and entrance face the historic Ryman Auditorium as a tribute to the Nashville's music history.
The Bridgestone Arena is owned by the Sports Authority of Nashville and Davidson County and operated by Powers Management Company, a subsidiary of the Nashville Predators National Hockey League franchise, which has been its primary tenant since 1998. The Predators hosted the NHL Entry Draft here in 2003.
In 1997, it was the venue of the United States Figure Skating Association national championships, and in 2004 hosted the U.S. Gymnastics championships. It was the home of the Nashville Kats franchise of the Arena Football League from 1997 until 2001, and hosted the team's revival from 2005 to 2007, when the Kats folded.
The venue has also hosted numerous concerts and religious gatherings, and some major basketball events, including both men's (2001, 2006, 2010) and women's tournaments of the Southeastern Conference and the Ohio Valley Conference. Nashville will serve as a primary venue for the SEC Men's Basketball Tournament nine times between 2015 and 2025 (2015-2017, 2019-2021, and 2023-2025) after the SEC signed a long-term agreement with the Nashville Sports Council in 2013. It hosted the 2014 NCAA Women's Final Four and will host women's tournaments in 2018, 2022, and 2026. Since 2002, it has also hosted a PBR Built Ford Tough Series bull riding event every year (except in 2005 and 2006) until 2010. The event moved to the Arena in 2002 after having previously occupied the Municipal Auditorium from 1994 to 2001; during the venue's first year hosting this event, the Built Ford Tough Series was known as the Bud Light Cup.
In odd-numbered years, the arena was regularly one of eight sites to host the first and second rounds of the men's NCAA Basketball Tournament for the first ten years of its existence, though it was taken out of the rotation for several years, partly due to the obsolete octagonal mid-1990s-style scoreboard that hung above the arena floor. It was replaced in the summer of 2007 by a new $5 million scoreboard and digital control room. The NCAA Tournament returned to Nashville in 2012.
Beginning in 2006, the Country Music Association Awards have been held in the arena after the awards show moved from the Grand Ole Opry House with a one-year stop in New York City at Madison Square Garden in 2005.
Due to the 2012 NHL Lockout, the Predators could not host a game until January 19, 2013. Instead, the arena hosted a Southern Professional Hockey League preseason game between the only other Tennessee pro hockey franchise, the Knoxville Ice Bears, and their cross-border rivals Huntsville Havoc on October 20. 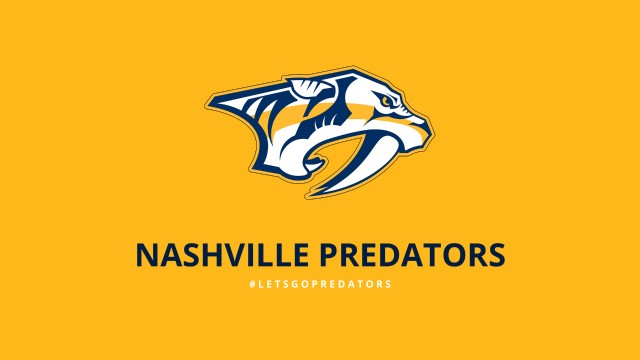