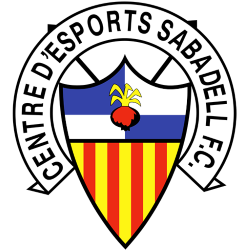 Centre d'Esports Sabadell Futbol Club, S.A.D. (Catalan pronunciation: ) is a Spanish football team based in Sabadell, a city in the province of Barcelona in the autonomous community of Catalonia. Founded in 1903, it plays in the La Liga Smartbank Segunda División, holding home games at Estadi de la Nova Creu Alta.

By historical standards, CE Sabadell FC is the third best club in Catalonia, after FC Barcelona and RCD Espanyol. Estadi de la Nova Creu Alta is a multi-use stadium in Sabadell, Catalonia, Spain. It is currently used mostly for football matches and hosts the home matches of CE Sabadell FC. The address of the stadium is Plaça Olímpia s/n, 08206 Sabadell, and the offices of the club are in the stadium. The stadium holds 11,981 people, after the last reform. The stadium was built in 1967. During the 1992 Summer Olympics it hosted six football matches.