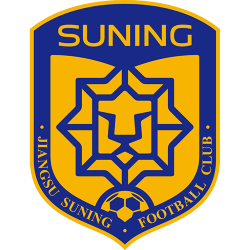 Jiangsu Suning Football Club (simplified Chinese: 江苏苏宁; traditional Chinese: 江蘇蘇寧; pinyin: Jiāngsū Sūníng) is a professional football club that participates in the Chinese Super League under licence from the Chinese Football Association (CFA). The team is based in Nanjing, Jiangsu and their home stadium is the Nanjing Olympic Sports Centre which has a seating capacity of 61,443. Their current owners are Suning Appliance Group (Chinese: 苏宁电器集团有限公司), a sister company of Suning Commerce Group (Chinese: former 苏宁电器股份有限公司).

The team was founded in 1958 as Jiangsu Provincial Team while the current professional football club was established in March 1994. They were one of the founding members of the first fully professional top tier league in China participating in the 1994 Chinese Jia-A League season; however, they faced relegation in that campaign. They have since gone on to win promotion back into the top tier at the end of the 2008 league season and achieved their best ever league position when they finished runners-up in the 2012 season.

According to Forbes, Jiangsu are the fourth wealthiest football team in China, with a team value of $144 million, and an estimated revenue of $36 million in 2015.

The Nanjing Olympic Sports Centre (Chinese: 南京奥林匹克体育中心) is used mostly for association football and also for athletics. It is located in Nanjing Hexi New City, covers an area of 89.6 hectares, with a total construction area of about 401,000 square meters.

As the main venue for the 2014 Summer Youth Olympics and for the 2005 National Games of China, the Nanjing Olympic Sports Centre, Jiangsu Province, the largest since the founding of the social utility projects, is also a period of 15 construction projects in Jiangsu, one of large-scale government investment. The 4 billion yuan RMB Olympic standard complex was designed by International Sports Architecture practice HOK Sport (now Populous).