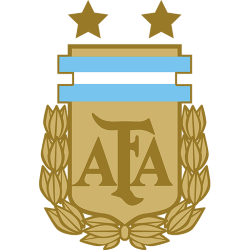 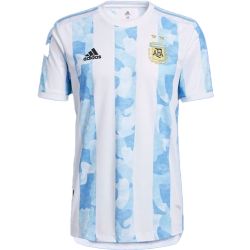 La Selección (national team), also known as the La Albiceleste, has appeared in five World Cup finals, including the first final in 1930, which they lost 4–2 to Uruguay. Argentina won in their next final appearance in 1978, beating the Netherlands at extra time, 3–1. Argentina won again in 1986, through a 3–2 victory over West Germany, and a tournament campaign led by Diego Maradona. They made the World Cup finals once more in 1990, and lost 1–0 to West Germany following a controversial penalty call in the 87th minute. Argentina, led by Lionel Messi, made their fifth appearance in a World Cup final in 2014, again losing to Germany, 1–0 during extra-time. Argentina's World Cup winning managers are César Luis Menotti in 1978 and Carlos Bilardo in 1986.

Argentina has also been very successful in the Copa América, winning it 14 times, second only to Uruguay. The team also won the 1992 King Fahd Cup and the 1993 Artemio Franchi Trophy. Argentina is known for having rivalries with Brazil, Uruguay, England, and Germany due to particular occurrences with one another throughout football history.

Estadio Antonio Vespucio Liberti, also referred to as River Plate Stadium, Monumental de Nuñez, or simply El Monumental, is a stadium in the Belgrano district of Buenos Aires, Argentina (although popular belief wrongly states that the stadium is in the Núñez district), home of the football club River Plate. It was opened on 26 May 1938 and named after former club president Antonio Vespucio Liberti. It is the largest stadium in Argentina with a capacity of 70,074 and is also home of the Argentina national football team. It was the main venue in the 1951 Pan American Games. It hosted the 1978 FIFA World Cup Final between Argentina and the Netherlands. Additionally, it hosted four finals of the Copa América, most recently in 2011.