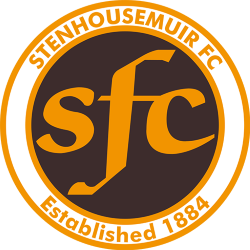 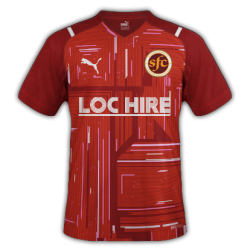 Stenhousemuir Football Club is a Scottish football club located in Stenhousemuir, Falkirk. They are a member of the Scottish Professional Football League and currently play in Scottish League One.

Through much of its history the team has competed in the lower leagues of Scottish football, spending the 2006–07 season in the Third Division. In 2008–09, despite earning fourth place, the club won the promotion play-offs and returned to the Scottish Second Division.

In September 2009, Stenhousemuir Football Club, Ltd. was re-registered as a Community Interest Company.

Ochilview Park is a football stadium in Stenhousemuir in central Scotland, which is the home ground of Scottish League One club, Stenhousemuir who currently share it with local rivals East Stirlingshire. The stadium has a capacity of 3,746 with 626 seated.

The stadium was opened in 1890 and has been the home of Stenhousemuir since. It has also played host to the home games of other nearby clubs including Stirling Albion and Falkirk whilst their new stadiums were under construction. The record attendance of 12,500 was set during a Scottish Cup quarter final match against East Fife in March 1950.