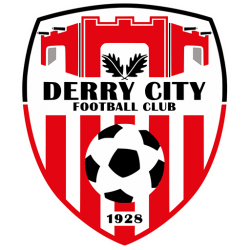 Derry City Football Club (Irish: Cumann Peile Chathair Dhoire) is a professional football club based in Derry, County Londonderry, Northern Ireland. It plays in the League of Ireland Premier Division, the top tier of league football in the Republic of Ireland, and is the League of Ireland's only participant from Northern Ireland. The club's home ground is the Brandywell Stadium and the players wear red and white striped shirts from which its nickname, the Candystripes, derives. The club is also known as the Red and White Army, Derry or City.

The club, founded in 1928, initially played in the Irish League, the domestic league in Northern Ireland, and won a title in 1964–65. In 1971, security concerns related to the Troubles meant matches could not be played at the Brandywell. The team played home fixtures 30 miles (48 km) away in Coleraine. The security forces withdrew their objections to the use of the Brandywell the following year, but in the face of insistence from the Irish League that the unsustainable arrangement continue, the club withdrew from the league. After 13 years in junior football, it joined the League of Ireland's new First Division for 1985–86. Derry won the First Division title and achieved promotion to the Premier Division in 1987, and remained there until an administrative relegation in 2009. The club won a domestic treble in 1988–89, the only League of Ireland club so far to do so.

After spending the majority of its time in the League of Ireland in the Premier Division, the club was expelled in November 2009 when it was discovered there were secondary, unofficial contracts with players. It was reinstated a few weeks later but demoted to the First Division, the second tier.

The football team play on Friday evenings usually at 7.45pm; the greyhound racing takes place on Monday evenings and occasionally on Thursday evenings.

Until September 2018, the stadium was known as the Brandywell Stadium before it was renamed to honour Ryan McBride.