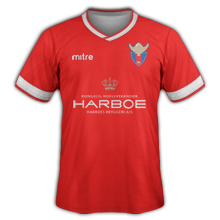 FC Vestsjælland, also known as FCV Vikings, is a professional Danish football club currently playing in the Danish 1st Division. They play their home matches at Harboe Arena Slagelse in Slagelse, which has a capacity of 10,000 (3,300 seats).

Harboe Arena Slagelse is a sports center located in Slagelse, which among other things is used for athletics and running of football matches on the associated stadium, including home games for Slagelse Football Club and Athletics Club and its elite superstructure FC Zealand.

Sports complex was built in 1927 by Slagelse Municipality among others as a result of the complete merging of Slagelse Football Club and Slagelse Sports Association for Slagelse Football Club & Sports Association in 1919. Show track has a capacity of 10,000, of which 3,300 are seating. Stadium record of 10,000 spectators dates back to the early 1970s, when it was associated with a division match in Denmark tournament in football between Slagelse B & I and Holbaek Ball and Athletics Club.