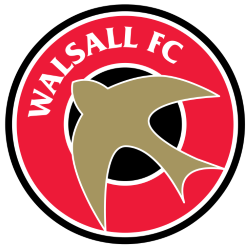 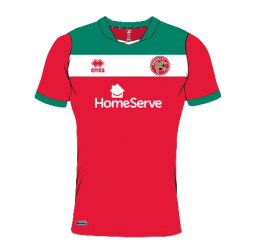 Walsall Football Club is a professional association football club based in the town of Walsall, West Midlands, England. The team compete in League Two, the fourth tier of the English football league system.

The club was founded in 1888 as Walsall Town Swifts, an amalgamation of Walsall Town F.C. and Walsall Swifts F.C. The club was one of the founder members of the Second Division in 1892, but have spent their entire existence outside English football's bottom division; their highest league finish was fourteenth in Division twenty seven in 1961–62. Their first match at Wembley Stadium was the 2015 Football League Trophy Final, which they lost to Bristol City.

Walsall moved into their Bescot Stadium in 1990, having previously played at nearby Fellows Park for almost a century. The ground is known as Banks's Stadium for sponsorship purposes. The team play in a red and white kit and their club crest features a swift. The club's nickname, "The Saddlers", reflects Walsall's status as a traditional centre for saddle manufacture. Bescot Stadium, also known as the Banks's Stadium for sponsorship purposes, is a football stadium in Walsall, England, and the current home ground of Walsall Football Club. It was built in 1989-90, by GMI Construction, with a reported build cost of £4.5m.

The stadium replaced the club's previous ground, Fellows Park, which was located a quarter of a mile away.