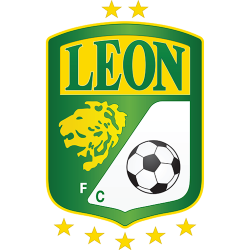 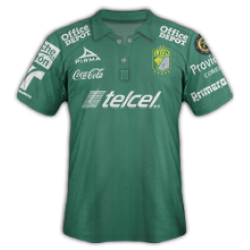 Club León, simply known as León, is a Mexican professional football club based in the city of León, Guanajuato, Mexico.

León has won the Liga MX México Primera División (Mexico First Division) title seven times: in 1948, 1949, 1952, 1956, 1992, Apertura 2013, and most recently Clausura 2014. They became the first Mexican "Campeonísimo" (winner of the League and the México Cup in the same year) in 1949. In 1993 León was the CONCACAF Champions' Cup runner-up, losing the final match against Costa Rican team Deportivo Saprissa, in one of the greatest upsets among the defeats in the club's history. They are also only the second Liga MX team to win back-to-back championships in short tournaments.

They also qualified for the Champion's Cup in 1998, but were eliminated in the semi-final. The team has been a consistent contender for the Primera División A title since relegation from the Primera División in 2002; they failed to obtain the promotion due to constant mediocre performances in the play-offs despite good appearances during the regular season until the Clausura 2012 Tournament when León defeated Correcaminos UAT 6–2 and after ten years were finally promoted to the Primera División. In the Apertura 2013 season they became champions after defeating América 5–1, giving them their sixth championship star. The next season, Clausura 2014, they became champions for the second year in a row defeating Pachuca 4–3, giving them their seventh championship star and becoming "bicampeones." In recent years, Club Leon games have even attracted non-Spanish speaking football fans; in addition to new Spanish-language broadcast partnerships with Fox Sports Latinoamérica in Mexico and Telemundo / NBC Deportes in the U.S. Since 2016, Univision Deportes holds the U.S. broadcasting rights to León home games.

The Estadio León, unofficially known as Nou Camp, is a mid-sized football stadium with a seating capacity of 31,297 built in 1967, and located in the city of León, Guanajuato, in the Bajío region of central Mexico. This sport facility is used mostly for football matches and is the home of the Club León.

Because of its excellent location and facilities, this stadium hosted matches for the 1970 FIFA World Cup, 1983 FIFA World Youth Championship, and the 1986 FIFA World Cup. It also hosted football matches during the 1968 Summer Olympics. During those games, it seated 23,609.

On March 8, 2017, judiciary officials of the city of León determined that ownership of Estadio León is still in fact property of Zermeño Reyes y Héctor González. It is unknown if negotiations will begin for Grupo Pachuca to purchase the stadium. One possible alternative was the New Estadio León, originally proposed in 2008.