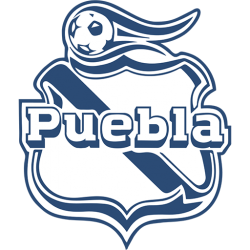 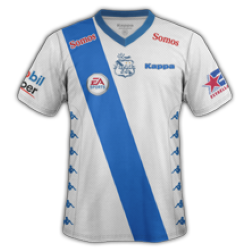 Club Puebla, formerly Puebla F.C. is a Mexican professional football club based in the city of Puebla, competing in the Liga MX. The team shirt features a diagonal stripe (traditionally blue on white on the home kit, and a combination of different colors on the away kits) that crosses the chest diagonally from right to left, which is considered a distinctive element of its identity.

Since 1904, the city of Puebla had an official football team. It started as club Puebla AC, founded by Englishmen. It was later incorporated into the Mexican football league during the amateur era. In the 1944–45 season, they won their first official tournament, the Copa Mexico (nowadays known as Copa MX). They won that trophy again in the 1953–54 season. Their first league title came in the 1982–83 season after defeating Guadalajara on penalty kicks. The team won a third Copa Mexico on the 1987–88 season, and in the 1989–90 season, they won both their fourth Copa Mexico and their second league title after beating Universidad de Guadalajara. This feat (winning both the league and the Copa Mexico championships) earned the team the right to be counted among the "Campeonísimos". In 1991, they defeated Police from Trinidad and Tobago for their first CONCACAF championship. In the 1992–1993 season, the team ended as runner up, as they lost the league title final 2–0 against Leon in overtime.

The team was relegated to Primera A (the second tier league of Mexico) at the end of the 1999 season, but the club owners bought the franchise of the promoted team (this practice was later banned by the league). The team was relegated again at the end of the Clausura 2005 season. The team won the Primera A Apertura 2006 tournament beating Salamanca in the final; in the following tournament, Clausura 2007, they were knocked out in the semi-finals by Leon. Having won one of the tournaments of the yearly cycle, they earned the right to compete for the promotion against the winners of the other tournament. On May 26, 2007, Puebla was promoted again by defeating Dorados de Sinaloa in the promotion game, in an overcrowded Cuauhtémoc Stadium with more than 45,000 fans. Celebrations all around the city of Puebla ensued, remembering the celebrations in 1983 and 1990 when the team won the league championship. Puebla spent the following years eluding relegation in the top tier league, but in the Clausura 2009 season, against the odds, they managed their way to the tournament knockout stage, reaching the semi-finals, where they were eliminated by the eventual champion, Pumas UNAM.

As of November 2015, Cuauhtémoc Stadium is considered to be an innovation in textile design and sports architecture in Mexico, since it is the first and only stadium in Latin America to have a facade totally covered with ETFE.