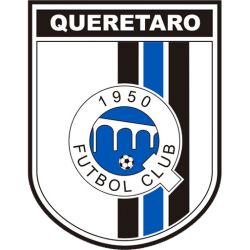 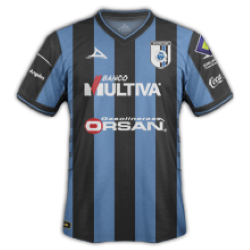 Querétaro Fútbol Club, also called Gallos Blancos de Querétaro, is a Mexican professional football club based in Querétaro City, Mexico. Querétaro plays in the Liga MX, the top level of the Mexican football league system. Their colors are blue, black and white and the team mascot is a rooster. They were to be relegated to the Liga de Ascenso in 2013, but Chiapas F.C. was relocated to Querétaro.

Estadio Corregidora de Querétaro is a stadium in Querétaro City, Mexico. Named for Mexican War of Independence heroine Josefa Ortiz de Domínguez ("La Corregidora"), it has a capacity of 33,162 and is located on the outskirts of the city of Querétaro, 211 kilometres (131 mi) north of Mexico City. This venue is used mostly for football (soccer) games. It is the home of the team Querétaro FC and hosted the 1986 FIFA World Cup.

Built in 1985 in a collaboration between Mexican and European partners, it is considered one of the most notable stadiums in Mexico. Its design allows for the safe exit of all spectators even if full in less than seven minutes.

It is one of the largest football venues in Mexico, after the Estadio Azteca, the Estadio Olímpico Universitario, the Estadio Azul (all in Mexico City), Estadio Cuauhtémoc in Puebla, Estadio BBVA Bancomer in greater Monterrey and Estadio Jalisco in Guadalajara, Jalisco

It is also used for concerts, hosting internationally known pop stars like Rod Stewart, Miguel Bosé and Shakira, among others.