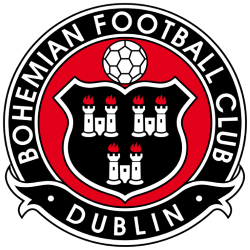 Bohemians were founded on 6 September 1890 in the Phoenix Park Gate Lodge beside the North Circular Road entrance and played its first games in the Park's Polo Grounds. One of the founding members of the League of Ireland in 1921, after their withdrawal from the Irish Football League. They established themselves as a major force within the first 15 years of the League of Ireland, winning 5 league titles, 2 FAI Cups and 4 Shields, but struggled for decades after that, largely due to their strict amateur status, going 34 seasons without winning a major trophy. Bohemians dropped their amateur ethos in 1969 and proceeded to win 2 League titles, 2 FAI Cups and 2 League cups during the 1970s. They suffered a further decline throughout the 1980s and most of the 1990s before claiming League and Cup doubles in 2001 and 2008, alongside the 2003 and most recently 2009 title wins.

Bohemians play their home matches at Dalymount park in the Northside neighbourhood of Phibsborough. They are owned 100% by the members of the club. Their club colours are red and black, which they adopted at the 4th AGM in October 1893. Bohemians supporters often refer to their club by a number of nicknames including Bohs and The Gypsies, and provide one half of a bitter rivalry with Southside club, Shamrock Rovers.

Dalymount Park (Irish: Páirc Cnocán Uí Dhálaigh) is a football stadium in Phibsborough on the Northside of Dublin, Ireland.

It is the home of Bohemian F.C., who have played there since the early 20th century. Affectionately known as Dalyer by fans, it was also historically the "home of Irish football", holding many Irish internationals and FAI Cup finals. It has also hosted UEFA Champions League qualifiers, UEFA Cup and UEFA Cup Winners' Cup matches. However, the ground was largely undeveloped between the 1940s and the 2000s, and has now fallen out of use as a major venue, except for the home games of Bohemians.

The ground has also been used as a home ground by other League of Ireland teams, including Shamrock Rovers, Dublin City F.C. and Sporting Fingal, and will be used by Shelbourne F.C. once it has been developed.