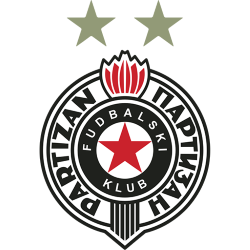 Fudbalski klub Partizan (Serbian Cyrillic: Фудбалски клуб Партизан, English: Partizan Football Club), commonly referred to as Partizan Belgrade (Serbian: Партизан Београд / Partizan Beograd) outside of Serbia, or simply as Partizan (Serbian Cyrillic: Партизан), is a Serbian professional football club based in Belgrade. It forms a major part of the Partizan multi-sport club. The club plays in the Serbian SuperLiga and has spent its entire history in the top tier of Yugoslav and Serbian football having won a total of 45 official trophies: 27 national championships, 16 national cups, 1 national supercup, 1 Mitropa Cup finishing in the Yugoslav league all-time table as second.

Partizan was founded by young high officers of the Yugoslav People's Army (JNA) in 1945 in Belgrade, as part of the Yugoslav Sports Association Partizan. Their home ground is the Partizan Stadium in Belgrade, where they have played since 1949. Partizan holds records such as playing in the first European Champions Cup match on 4 September, 1955, as well as becoming the first Balkan and Eastern European football club to reach the European Champions Cup final, when it did so in 1966. Partizan was the first Serbian club to compete in the group stage of the UEFA Champions League.

The club has a long-standing rivalry with Red Star Belgrade. Matches between these two clubs are known as the Eternal Derby ("Večiti derbi") and rate as one of the greatest cross-town clashes in the world. In September 2009, the British newspaper Daily Mail ranked the Red Star–Partizan derby fourth among the ten greatest football rivalries of all time. Partizan also has many supporters in all the other former-Yugoslav republics and in the Serbian diaspora.

Their popular nickname 'The Steamroller' (Parni valjak) was originally used in the press report after the 7-1 hammering of Red Star at the 13th Eternal Derby on 6 December 1953. This nickname was later embedded in the lyrics of the club anthem. Genuine steamroller painted in black and white was wheeled out next to the pitch on 28 May 1978, during the 8th league title celebrations.

Partizan Youth Academy is one of the most renowned and export-oriented in Europe. CIES (University of Neuchâtel International Centre for Sports Studies) Football Observatory report of November 2015 ranks Partizan Belgrade at the top place of training clubs out of the 31 European leagues surveyed. CIES report of 2019 confirmed Partizan Belgrade as the most productive training club in Europe, with 75 of their academy graduates currently playing across 31 European top divisions.

The Partizan Stadium (Serbian: Стадион Партизанa, romanized: Stadion Partizana) is a football and track-and-field stadium in Autokomanda, municipality of Savski Venac, Belgrade, Serbia, which has a seating capacity of 32,710. Situated on the Topčider Hill at Humska 1 street, it is a home field of Partizan Belgrade. Also, it was the home of Partizan's main rival Red Star Belgrade from 1959 to 1963, when they moved to the Rajko Mitić Stadium.

It carried the name JNA Stadium (Serbian: Стадион ЈНА (Стадион Југословенске народне армије) / Stadion JNA (Stadion Jugoslovenske narodne armije)) for a long time and was the site of Youth Day parade. Even today, the majority of football fans in all countries of the former SFR Yugoslavia call it by its old name. Partizan fans, the Grobari, call it also Fudbalski hram (English: The Temple of Football). The stadium has four stands: the south, north, west and east. Before conversion to an all-seater stadium, the ground had a capacity of 50,000 people.

There were plans to replace the current stadium with a new one. Swiss companies Mob Lab and Marazzi-Paul presented a project of a 38,000 seated stadium with commercial contents. The construction was supposed to start in 2006 but it was postponed and later cancelled.