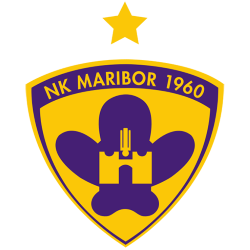 Nogometni klub Maribor, commonly referred to as NK Maribor or simply Maribor, is a professional football club based in Maribor, Slovenia, that competes in the Slovenian PrvaLiga, the top tier of Slovenian football. Nicknamed "The Purples" (Vijoličasti), the club was founded on 12 December 1960. They are regarded as a symbol of Slovenian football, particularly in their home region of Styria in northeastern Slovenia.

Maribor have won a record 15 Slovenian PrvaLiga titles, 9 Slovenian Cups and 4 Slovenian Supercups. The club's most successful period was in the late 1990s and early 2000s, when they won seven successive league titles. Following the 2010–11 season, Maribor became the major force in Slovenian football for the second time, having won seven out of nine championships since then. Prior to Slovenia's independence in 1991, Maribor played in the Yugoslav football system, where the club, apart from winning the Yugoslav second division in 1967, had no major successes.

Maribor are one of three Slovenian teams which participated in the Yugoslavia's highest division, the Yugoslav First League, between the end of World War II in 1945 and the breakup of Yugoslavia in 1991. The club is also one of the two founding members of the Slovenian PrvaLiga who have never been relegated from the top flight since the league's establishment in 1991. In addition, Maribor is the only Slovenian club to have participated in the group stages of the UEFA Champions League and UEFA Europa League. Besides that, the club is one of the only two clubs from former Yugoslavia, beside Red Star Belgrade, that have won an official UEFA trophy since winning the 2006 UEFA Intertoto Cup.

The club holds a long-standing rivalry with Olimpija from the capital Ljubljana, with whom they contest the Eternal derby (Večni derbi). Maribor also have a loyal and passionate fan base and has the highest average all-time attendance in Slovenia. Maribor's home ground is the Ljudski vrt stadium, which has a capacity of 12,702 seats. It was originally built in 1952 and later underwent a series of major reconstructions in the 1990s and 2000s.

The Stadion Ljudski vrt (English: People's Garden) is an association football stadium located on the left bank of the river Drava in the district of Koroška Vrata, Maribor, Slovenia, with a seating capacity of 12,702. The ground has been the home of NK Maribor for every season since their formation on 12 December 1960, with the exception of two short periods in early 1961 during the construction of the new stands and early 2008, when the stadium underwent a major reconstruction. Opened in 1952, it was originally the home of Branik Maribor, an association football club, which folded and was disbanded in 1960. The ground has hosted 23 Slovenia internationals at senior level, the first in 1994 and the most recent in 2015. Ljudski vrt has hosted more Slovenian Football Cup finals than any other stadium, having hosted six matches in total. In addition, the stadium was one of the four venues, which hosted the 2012 UEFA European Under-17 Football Championship.

The area where the Ljudski vrt is situated was used for burial purposes for centuries before it was first used for football in the early 1920s. Over the course of its history the stadium has gone through various stages of renovation and development, resulting in the current configuration. The record attendance at the stadium is 20,000, which was set in a match between Maribor and Proleter Zrenjanin in 1973. This record was set before the ground's conversion to an all-seater stadium in 1998; the changes, a result of UEFA safety regulations, include greatly reduced capacity. Notable feature of the stadium includes the main stand 129,8 meters long and 18,4 meters high concrete arch that is protected by the Institute for the Protection of Cultural Heritage of Slovenia (Slovene: Zavod za varstvo kulturne dediščine Slovenije) as an architectural and historical landmark.

Future plans for the Ljudski vrt include the construction of a nearby underground parking garage that would solve the current parking problems and the redevelopment of the outdated main stand, which was built in 1962 and has not received a major renovation since then. The stadium is a landmark of the city of Maribor and is considered as one of the most beautiful smaller stadium in the world.