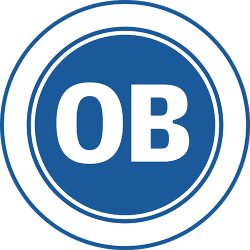 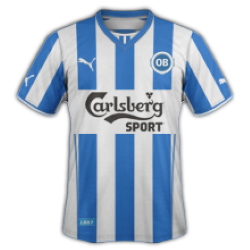 Odense Boldklub (also known as Odense BK or the more commonly used OB) is a Danish professional football club based in the city Odense. The club has won three Danish championships and five Danish Cup trophies. OB play in the Danish Superliga and their home field is Nature Energy Park. OB's clubhouse is located in Ådalen near Odense River.

Odense Stadium (Danish: Odense Stadion) is an association football stadium located in the Bolbro district of Odense, Denmark. Nicknamed Folkets Teater (en: "The People's Theater") by Jack Johnson, it has been the home ground of Odense Boldklub since the 1940s and has previously hosted select matches for FC Fyn (2011–2012), Boldklubben 1909, Boldklubben 1913 and Odense Boldklub Kvinde Elite (until 2016) during their tenures in the higher ranking leagues. With a current capacity of 15,790 (13,990 seatings; 13,573 seatings for international matches), it is the fifth largest football stadium of any football team in Denmark. It is part of the sports complex, known as Odense Sports Park (Danish: Odense Idrætspark), that is owned by Odense Municipality and run by the company of Odense Idrætspark (a department of "By- og Kulturforvaltningen, Fritid og biblioteker" under the municipality).