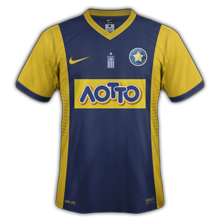 Asteras Tripoli Football Club (Greek: "Αστέρας Τρίπολης", transliterated "Asteras Tripolis", translated "Star of Tripoli") is a Greek football club from the town of Tripoli in Arcadia, Greece. The club was founded in 1931 and since the 2007–08 season, they have played in Superleague Greece, the top professional league in Greece.