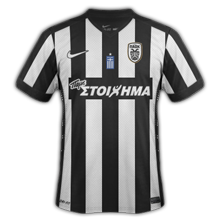 PAOK was established in 12 April 1926 in Turkey, by Greek Constantinopolitans who fled to Thessaloniki from the city of Constantinople in the wake of the Greco-Turkish War. Emblem of the team is a Byzantine-style double-headed chicken.

PAOK currently plays in the top-flight Superleague Greece, which they have won twice (1975–76 and 1984–85). They have won also four times the Greek Football Cup (in 1971–72, 1973–74, 2000–01 and 2002–03 seasons). The team has appeared several times in the UEFA Europa League competition. Their best European performance was in the 1973–74 season, when they reached the quarter-finals of the UEFA Cup Winners' Cup. PAOK is an ordinary member of the European Club Association.

PAOK's traditional rivalries are against Olympiakos due to match fixing from both sides and the "Thessaloniki's derby" against Aris because of the complex of paok fans.

Toumba Stadium (Greek: Στάδιο Τούμπας) is a football stadium in Thessaloniki Greece It is the property of amateur A.S. PAOK. It is a family donation Ioannis Dedeoglou as later was the donation and plot built in closed gym basketball P.A.O.K. Sports Arena. in Pylaia Thessaloniki The Toumba Stadium started construction in 1958 and completed in 1959. Patrons on the project were the Ministry of Culture and Sport (Greece) (paid the amount of 1.100.000 drachmas) and it Hellenic National Defence General Staff ( where the space belonged at Hellenic National Defence General Staff ) Contributed decisively to expropriate the space Toumba Stadium, the then defense minister Georgios Themelis for the expropriation of the area of Toumba Stadium during the government Konstantinos Karamanlis,the 1958 As the old Stage of PAOK fountain Square downtown expropriated for the construction of Theological Seminary, as the surrounding area was given to Aristotle University of Thessaloniki Architect of the project was the Minas Trempelas and engineer Antonis Triglianos Important for its construction was the contribution and of its own group of fans, who were invited twice to assist financially through the "Special Fund for the erection of the new phase of PAOK" adopted by the administration of the club, while some friends PAOK worked selflessly personal work during the process of construction It was built in 6 September 1959 as the club's prime sporting venue and served the home ground for the club's football team, which was participating in the then HFF Panhellenic Championship. until today for the needs for the Superleague Greece of Greek Football Cup and UEFA Europa League The stadium is located in the district of Toumba (Thessaloniki) in eastern Thessaloniki. Its original capacity was 45,000, until the installation of seating on all stands in 1998 reduced the capacity to 32,000 (seated). The introduction of security zones in 2000 further reduced the capacity to the current capacity 28,703 seats.2} A record attendance of 45,252 has been recorded in a 1st division football match between PAOK and AEK on 19 December 1976. The stadium's official name is simply PAOK Stadium", however it is commonly referred to as "Toumba" after the name of the district Toumba (Thessaloniki)) in which it is located in.Toumba Stadium has hosted several games of the Greece national football team. The stadium was selected as one of the training venues for the football tournaments of the 2004 Olympic Games and due to this it was heavily upgraded. The relevant works commenced in 2003 and the stadium was again ready to be used in the summer of 2004 boasting a brand new look. The most important modification was the construction of a new four-storey building behind the main west stand (gates 1,2 and 3). The new building of the stadium houses a number of VIP boxes and VIP lounges, service areas for TV and the Press and new club offices. A new roof was also installed over the west stand, while other works included new seats, upgrading of the dressing rooms, a new pitch and re-enforcement of the concrete pillars below the north curved stand (Gate 4 and Gate 4A). After the advent of the new major shareholder of PAOK Ivan Savvidis it 2012 buying the majority stake of PAOK began a gradual renovation in Toumba Stadium The big changes began in 2012–2013, but the main changes were made in 2014–2015 for the European obligations PAOK in UEFA Europa League starting from the central part Toumba Stadium manufactures Presidential Suite by major shareholder Ivan Savvidis became the gradual renovation in journalistic theory for convenience and functionality in the building of the third floor and the major changes made in 2014-15 for its European obligations team in UEFA Europa League.in early September-of 2015 the change was made turf Toumba Stadium