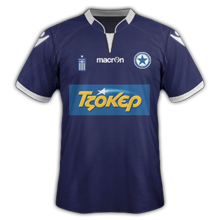 Atromitos Athens Football Club (Greek: Π.Α.Ε. Α.Π.Σ. Ατρόμητος Αθηνών, PAE APS Atromitos Athinon, literally meaning "Fearless") is an association football club based in Peristeri, Athens that plays in the Superleague Greece. It was founded in 1923 and its home ground is Peristeri Stadium.

Peristeri Stadium (also known as the Atromitos Stadium) is a multi-purpose stadium in Peristeri, a western district of Athens, in Greece.

It is currently used mostly for football matches and is the home stadium of Atromitos.