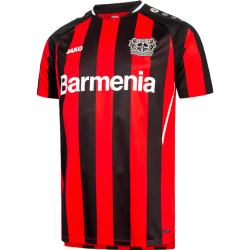 The club was founded in 1904 by employees of the German pharmaceutical company Bayer, whose headquarters are in Leverkusen and from which the club draws its name. It was formerly the best-known department of TSV Bayer 04 Leverkusen, a sports club whose members also participate in athletics, gymnastics, basketball and other sports including the RTHC Bayer Leverkusen (rowing, tennis and hockey). In 1999 the football department was separated from the sports club and is now a separate entity formally called Bayer 04 Leverkusen GmbH.

Bayer Leverkusen have won one DFB-Pokal and one UEFA Cup. Their local rivals are 1. FC Köln. The BayArena is a football stadium in Leverkusen, North Rhine-Westphalia, Germany, which has been the home ground of Bundesliga club Bayer Leverkusen since 1958. It is not a UEFA 5-star stadium, however it is in the process of becoming one.

The stadium was originally known as Ulrich-Haberland-Stadion (pronounced ( listen); English: Ulrich Haberland Stadium), named after a former chairman of Bayer AG, the club's founders. Its original capacity was 20,000.

In 1986, a rebuilding project began to convert it into a modern facility; the project continued intermittently over the following decade. The project was completed in 1997, making the stadium an ultramodern all-seater with a capacity of 22,500. The stadium was renamed BayArena in 1998.

In 1999, a hotel attached to the stadium was completed, with some rooms having a view of the pitch. The stadium complex also includes a high-class restaurant, which also overlooks the pitch, and conference facilities.

The city of Leverkusen originally bid to become a venue for the 2006 World Cup, with an expanded BayArena as the site. However, the city, Bayer Leverkusen, and the German organizing committee soon agreed that expanding BayArena to the FIFA-mandated minimum 40,000 capacity for World Cup matches would not be practical, and the city withdrew its bid. Instead, it was agreed that BayArena would be the main training facility for the German national team during the 2006 finals. Jürgen Klinsmann, former national coach, however decided against Leverkusen and opted for Berlin as the main training facility. As compensation, BayArena would supposedly host two national matches, though they were never played.