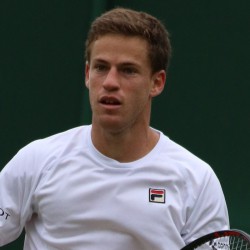 Diego Sebastián Schwartzman (Spanish pronunciation: , German: ; born 16 August 1992) is an Argentine professional tennis player. He has won four ATP singles titles and reached his career-high singles ranking of world No. 8 in October 2020. As a clay court specialist, his best results have been on this surface. He is noted for his high-quality return game.

When he reached the quarterfinals of the 2017 US Open, the 170-centimetre (5 ft 7 in) Schwartzman was the shortest Grand Slam quarterfinalist since the equally tall Jaime Yzaga at the 1994 US Open. Schwartzman said: "It’s not just for the big guys here."

Schwartzman reached his first Masters final at the 2020 Italian Open, defeating defending champion and world No. 2, Rafael Nadal, in straight sets, and Denis Shapovalov along the way. He lost to Novak Djokovic in the final. A month later, at the 2020 French Open, he defeated world No. 3 Dominic Thiem to reach his maiden Grand Slam semifinal, where he became the shortest man to reach a Grand Slam singles semifinal since the 5-foot-6-inch (168 cm) Harold Solomon at the 1980 French Open.