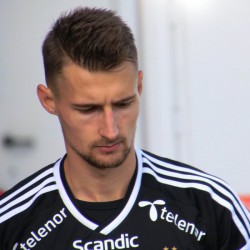 Elbasan Rashani (born 9 May 1993), also known as Elba Rashani, is a Kosovan professional footballer who plays as a left winger for French club Clermont and the Kosovo national team.

Club career
Brøndby
On 24 July 2014, Rashani signed a four-year contract with Danish Superliga club Brøndby and received squad number 14. Brøndby reportedly paid a 4,9 million Danish krone transfer fee. Seven days later, he made his debut with Brøndby in the 2014–15 UEFA Europa League third qualifying round against Club Brugge after coming on as a substitute at 76th minute in place of Mikkel Thygesen.

Rosenborg
2016 season as loan
On 11 January 2016, Rashani joined Tippeligaen side Rosenborg, on a season-long loan. Two days later, he made his debut in a 1–0 away defeat against Odd after being named in the starting line-up.

2017 season
On 18 November 2016, Rashani returned and signed a two-year contract with Eliteserien club Rosenborg and this transfer would become legally effective in January 2017. On 23 March 2017, he made his debut with Odd in the 2017 Mesterfinalen against Brann after being named in the starting line-up.

Return to Odd
On 4 August 2017, Rashani signed a three-and-a-half year contract with Eliteserien club Odd and received squad number 11. Two days later, he made his debut in a 2–1 home win against Sogndal after being named in the starting line-up.

BB Erzurumspor
On 24 January 2021, Rashani signed a one-and-a-half year contract with Süper Lig club BB Erzurumspor. Three days later, he made his debut in a 2–0 away defeat against Galatasaray after coming on as a substitute at 46th minute in place of Rahman Buğra Çağıran.

Clermont
On 16 July 2021, Rashani signed a two-year contract with Ligue 1 club Clermont. On 8 August 2021, he made his debut against Bordeaux after coming on as a substitute at 78th minute in place of Jim Allevinah and assists in his side's first goal during a 0–2 away win. Fourteen days after his debut, Rashani scored his first goals for Clermont in his third appearance for the club in the 3–3 away draw against Lyon in Ligue 1.

International career
From 2010, until 2015, Rashani has been part of Norway at youth international level, respectively has been part of the U17, U18, U19, U20 and U21 teams and he with these teams played 33 matches and scored three goals. On 10 November 2015, he received a call-up from Kosovo for a friendly match against Albania, Rashani made his debut after coming on as a substitute at 67th minute in place of Mërgim Brahimi and scored his side's second goal during a 2–2 home draw.

Personal life
Rashani was born in Värnamo, Sweden from Kosovan parents from Vučitrn, but grew up in Kragerø and Bø in Norway.