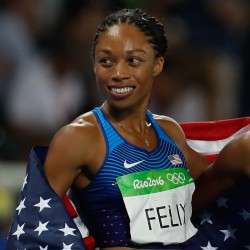 Felix has won five additional Olympic gold medals as a member of the United States' women's relay teams: three at 4 × 400 meters (2008–2016), and two at 4 x 100 meters (2012 and 2016). The 2012 U.S. Olympic 4 x 100 meters team also set the women's 4x100 meters world-record that still stands. Felix is the only female track and field athlete to ever win six Olympic gold medals, and is tied with Merlene Ottey as the most decorated female Olympian in track and field history, with a total of nine Olympic medals. Felix is also the most decorated athlete, male or female, in World Athletics Championships history with 18 career medals, and also has the most gold medals at 13.

Felix's 200 meters best of 21.69 secs from 2012 ranks her seventh on the all-time list. In 2013, she broke the world best for the rarely contested 150 meters distance, running 16.36 secs. In the 4 × 400 metres relay at the 2015 World Championships, she ran the fastest split ever recorded by an American woman, and third fastest split ever after Jarmila Kratochvilova and Marita Koch, with 47.72. Felix is also a four time Diamond League winner. She is a participant in the US Anti-Doping Agency's "Project Believe" program. She is coached by Bobby Kersee.

Allyson Felix is included in Time magazine's 100 Most Influential People of 2020.