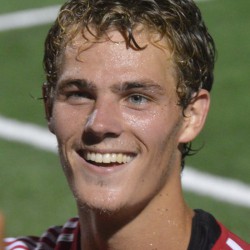 Tom Barlow (born July 8, 1995) is an American professional soccer player who plays as a forward for the New York Red Bulls of Major League Soccer.

Career
Youth career
Barlow grew up in St. Louis, Missouri and attended Chaminade College Preparatory School. He played college soccer for four years at the University of Wisconsin, scoring 23 goals in 78 matches. He also played in the PDL with Reading United, Des Moines Menace and Chicago FC United. He scored his first goal in the Lamar Hunt U.S. Open Cup against the Pittsburgh Riverhounds on May 17, 2017 in a 3–1 upset victory by Chicago.

On March 9, 2019 Barlow scored two goals in a 3–1 victory over Swope Park Rangers in the first match of the season.