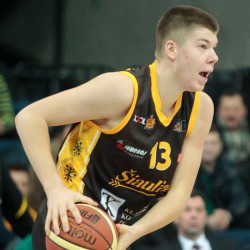 Rokas Giedraitis (born August 16, 1992) is a Lithuanian professional basketball player for Baskonia of the Liga ACB and the EuroLeague. He plays at the shooting guard and small forward positions.

Professional career
In 2013, Giedraitis was named Finals MVP of the NKL after scoring 26 points and leading his team to title. He then signed with BC Šiauliai club in which his father played his whole career. After continuing his solid playing, Giedraitis was later signed by the Lithuanian powerhouse Lietuvos rytas Vilnius and joined it in 2015. On July 5, 2018, Giedraitis terminated his contract with the team. On July 6, 2018, he signed a three-year contract with Alba Berlin of the Basketball Bundesliga. On July 4, 2020, Giedraitis signed a three-year deal with the Spanish League champions Saski Baskonia. On 9 October 2020, Giedraitis scored 26 points in the EuroLeague and this way achieved his new career-high in the league.

In 2019, at the age of 27, Giedraitis made his national team debut, after being selected to the final 12-man roster for the 2019 FIBA Basketball World Cup by the head coach Dainius Adomaitis.