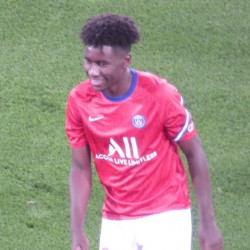 Timothée Pembélé (born 9 September 2002) is a French professional footballer who plays as a defender for Ligue 1 club Paris Saint-Germain.

Club career
Pembélé joined the Paris Saint-Germain Youth Academy in 2015, having spent the previous seven years of his early career at US Persan 03. On 4 July 2018, at the age of 15, he signed his first professional contract with Paris Saint-Germain, tying him to the club until 30 June 2021.

On 28 November 2020, Pembélé made his professional debut in a 2–2 Ligue 1 draw against Bordeaux, starting as a right center-back in a pairing with Presnel Kimpembe. Despite scoring an own goal at the tenth minute of the match, Pembélé's performance was regarded by most observers as a very promising one. He made good use of his speed and vision in defense, recovering the ball on several occasions, and helped his team move forward in attack with several successful vertical passes. At one point in the match, he dribbled a distance of 40 meters with the ball, leading to a corner for PSG.

On 4 December 2020, Pembélé extended his contract with PSG to 2024. He made his UEFA Champions League debut five days later, coming on as a substitute for Alessandro Florenzi in a 5–1 win against İstanbul Başakşehir. Pembélé’s first goal for Paris Saint-Germain came in a 4–0 victory over Strasbourg on 23 December 2020.

International career
Pembélé has represented France at U16, U17, and U18 level. He made a total of 6 appearances at the 2019 FIFA U-17 World Cup, a tournament in which France finished third.

Style of play
Having played different positions such as right-back, left-back, and center-back, Pembélé has been described as a "versatile" defender. In an interview with ArchySport, he stated that he prefers to play on the right side of defence. "I really like to attack, to defend well too. This side in general is where I feel best," said Pembélé.

According to Culture PSG, Pembélé is a quick player equipped with good technique, and he constantly brings an offensive threat on his side of the pitch. He boasts above-average skills in reading the game, which has helped him when repositioning on the field during matches. Pembélé is a right-footed player.

Personal life
Pembélé was born in Beaumont-sur-Oise in France. He is of Congolese descent.