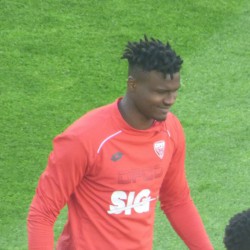 Sory Kaba (born 10 April 1995) is a Guinean professional footballer who plays for Danish Superliga club Midtjylland and the Guinea national team as a forward.

Club career
Born in Conakry, Kaba moved to Spain at early age and joined Alcobendas CF's youth setup in September 2012. He made his senior debut during the 2013–14 season, helping in their promotion to Tercera División.

On 29 January 2016, Kaba joined Elche CF, being assigned to the reserves also in the fourth tier. On 13 May of the following year he made his first team debut, coming on as a second-half substitute for Álex Fernández in a 0–1 Segunda División home loss against CD Mirandés.

Kaba scored his first professional goal on 28 May 2017, netting the equalizer in a 1–1 home draw against CF Reus Deportiu. On 29 July, after suffering relegation, he extended his contract for three years and was definitely promoted to the first team.

On 31 January 2019, the last day of the 2018–19 winter transfer window, Kaba signed with Ligue 1 side Dijon FCO having agreed a 4½-year contract. The club paid a €4 million transfer fee to Elche triggering a release clause.

On 5 July 2019, Danish Superliga club FC Midtjylland announced that they had signed Kaba on a five-year contract.

International career
Kaba was first called up for the Guinea national team on 25 September 2017, for a 2018 FIFA World Cup qualifiers against Tunisia. He made his full international debut on 7 October, replacing Demba Camara in the 1–4 loss.