Samuel Jackson Snead, May 27, 1912 – May 23, 2002) was an American professional golfer who was one of the top players in the world for the better part of four decades (having won PGA of America and Senior PGA Tour events over six decades) and widely regarded as one of the greatest players of all time. Snead was awarded a record 94 gold medallions, for wins in PGA of America (referred to by most as the PGA) Tour events and later credited with winning a record 82 PGA Tour events, including seven majors. He never won the U.S. Open, though he was runner-up four times. Snead was inducted into the World Golf Hall of Fame in 1974.
Snead's nicknames included "The Slammer", "Slammin' Sammy Snead", and "The Long Ball Hitter from West Virginia", and he was admired by many for having a "perfect swing", which generated many imitators. Snead was famed for his folksy image, wearing a straw hat, and making such statements as "Keep close count of your nickels and dimes, stay away from whiskey, and never concede a putt." and "There are no short hitters on the tour anymore, just long and unbelievably long." Fellow West Virginia Golf Hall of Fame Inductee Bill Campbell has said of Snead, "He was the best natural player ever. He had the eye of an eagle, the grace of a leopard and the strength of a lion." Gary Player once said that, "I don't think there's any question in my mind that Sam Snead had the greatest golf swing of any human being that ever lived". Jack Nicklaus said that Snead's swing was, "so perfect". 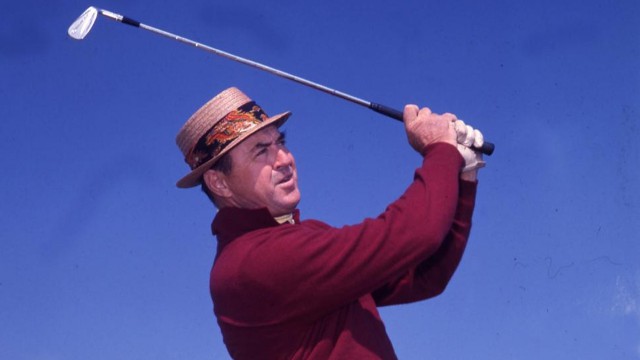