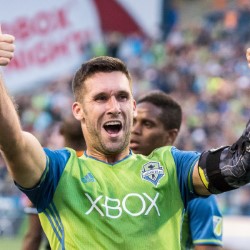 Career
Youth and College
Bruin played in the U.S. Soccer Development Academy for St. Louis Scott Gallagher. He graduated from De Smet Jesuit High School in 2008, and played college soccer for the Indiana University Hoosiers for three seasons, scoring 33 goals in 66 appearances, including a team-leading 18 goals in 20 appearances during the 2010 season. As a junior, he finished in second place behind Akron forward Darlington Nagbe for the 2010 Hermann Trophy. Bruin choose to forgo his final season of collegiate eligibility, instead declaring for the MLS SuperDraft and signing a Generation Adidas contract with Major League Soccer.

After spending 6 years and scoring 50 league goals with the Houston Dynamo, Bruin was traded to Seattle Sounders FC in exchange for targeted allocation money on December 23, 2016. Bruin made his Sounders FC debut on March 4, 2017, coming on as a substitute in a 2–1 loss against his former team, the Houston Dynamo. Bruin scored his first Sounders goal on March 11, 2017, an equalizer in the 94th minute of a 2–2 draw against Montreal.

International
Bruin made his debut for the United States men's national soccer team on January 29, 2013 as a substitute against Canada.