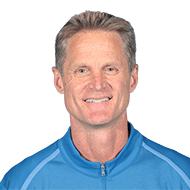 Stephen Douglas "Steve" Kerr (born September 27, 1965) is an American former professional basketball player and the current head coach of the Golden State Warriors. Kerr is a six-time NBA champion, winning three with the Chicago Bulls and two with the San Antonio Spurs as a player, and one with the Warriors as a head coach. Kerr has the highest career three-point percentage (45.4%) for any player with at least 250 three pointers made in NBA history.

On June 2, 2007, the Phoenix Suns named Kerr the team's President of Basketball Operations and General Manager. Kerr helped Managing Partner Robert Sarver buy the Suns in 2004 and became one of Sarver's trusted basketball advisors. Kerr announced his retirement from the Suns in June 2010. Afterwards, Kerr returned as a color commentator for NBA on TNT until 2014, when he pursued a career in coaching.

On May 14, 2014, the Golden State Warriors named Kerr the team's head coach. On April 4, 2015, with a win over the Dallas Mavericks, Kerr broke the NBA record for the most regular season wins for a rookie coach. The Warriors went on to win the 2015 NBA Finals, making Kerr the first rookie coach to win a championship since Pat Riley in the 1982 NBA Finals.

On April 13, 2016, the Warriors broke the record for the most wins in an NBA season.